No products in the cart.

10 Things to Know About Cannabis Terpenes: Descriptions and Functions

Terpenes, or terpenoids as some people prefer to call them, are the essential oil of plant life. They are responsible for that distinctive smell of pine trees, and also give cannabis its skunky aroma. There has been much about terpenes in relation to both medicinal and psychoactive effects of different strains of marijuana (see below), but not a lot on what they actually are and how they function.

Terpenes have been researched for their medicinal and psychoactive effects on humans, but they also play an important role in the formation of other chemicals and thus, life. attract the right kind of insects to pollinate them. They are also found in human brains and other body tissues.

Terpenes are volatile molecules, meaning they easily evaporate and turn into gas. Terpenes may come from the same plant or other plants in nature. For example, eucalyptus trees secrete a terpene called cineole (also known as eucalyptol). The pineal gland in the brain releases a terpene called pinene (also known as alpha-pinene) and this is what gives out that familiar smell from trees.

Terpenes are not unique to cannabis plants, they can be found in other types of plants like citrus peels or cinnamon bark, and some animal products like amniotic fluid and coniferous trees.

Marijuana plants produce an array of different aromatic compounds called “terpenes.” These aromatic oils have no THC [tetrahydrocannabinol], CBD [cannabidiol] or other cannabinoids but are found in the most concentrated amounts on a plant’s leaves. The smell and flavor of marijuana plants are determined by its terpenes. The complex mixture of these different types of terpenes is what gives cannabis it’s distinctive aroma and taste, with over 100 varieties to choose from although only a few produce pot’s signature scent which has led many smokers who identify as “connoisseurs” to develop their own preferences for certain strains based off this factor alone.

2) How Do Terpenes Affect Us?

Terpenes interact with our bodies through olfactory (smell) receptors which is why we experience their effects primarily through our sense of smell. When you inhale the rich fragrance coming from your joint or bong hit, that’s the aromatic oils entering your system through your nose and stimulating the nerves which lead to parts of your brain associated with memory, behavior and emotion. It is also thought that these same olfactory receptors are responsible for regulating appetite and mood.

3) So What Types of Terpenes Have Psychoactive Properties?

There is some evidence that the terpene myrcene may play a role in increasing THC absorption from other cannabinoids by opening non-cannabinoid receptors located on cell membranes which would increase the amount of active substances in your brain and therefore, the potency of the effects you get. Pinene, another common terpene in cannabis, has an alerting effect so that you become more aware while beta-caryophyllene helps open up CB2 receptors (which do not make you “high” but allow your body to use ingested CBD). Linalool and cineole have sedating effects, again attributed to their ability to stimulate olfactory receptors.

4) What About the Smell of Cannabis?

In addition to producing the hundreds of different terpenes found in cannabis, a marijuana plant also produces THC and CBD. The interaction between these different compounds produces what we refer to as “the smell” of cannabis plants. In the case of a sativa, that smell is sweet and citrusy with hints of pine or mint. Indicas are more likely to have an earthy, musky or even skunky smell. The presence of these other terpenes in combination with THC and CBD produce the distinctive aroma of different cannabis strains.

5) What’s the Difference Between Cannabis Terpenes and THC/CBD?

Although both of these cannabinoids have profound effects on mood, sleep and pain relief, there are more than 100 different types of terpenes in marijuana which affect our bodies in various ways. Some people report feeling sleepy after inhaling the scent of indicas but prefer sweet-smelling sativas. In addition, while THC and CBD are known to have anti-inflammatory effects on the body (which contribute to their pain killing properties), terpenes like beta-myrcene also have anti-inflammatory properties but without having any psychoactive effect.

6) What Other Properties Do Terpenes Have?

Depending on the type of plant they’re from, terpenes can act as anti-bacterial agents, anti fungal agents, antioxidants and even anesthetic agents (i.e., they numb our pain receptors).

Terpenes are the most abundant component of essential oils and plants and have been used for thousands of years for both medicinal and culinary purposes. Their uses span from treating skin conditions, improving sleep or even acting as natural remedies for anxiety and depression. In fact, many aromatherapy products contain terpenes and other essential oils in order to reap their benefits.

8) Do Terpenes Affect Our Cannabinoids?

One of the most important roles terpenes play in marijuana is their ability to work in conjunction with cannabinoids like THC and CBD. Research suggests that terpene profiles change as the flowers on a cannabis plant mature, which would suggest that different strains have different effects based off this factor alone.

9) What About Terpenes and CBD?

Most research suggests that terpenes enhance the effects of cannabinoids (in other words, they make THC more potent or CBD more effective). More specifically, according to a report published by Project CBD: “Different classes of phytocannabinoids interact with different types of cannabinoid receptors located throughout the body. This phenomenon has been referred to as the entourage effect, which is a concept that suggests all of the components of cannabis work together in what could be viewed as a symphony of medical possibilities.”

10) What Are the Most Common Terpenes in Marijuana?

Cannabis plants produce hundreds of different types of terpenes, but there are seven that occur most often. They include:

Below is a sample testing chart of terpene results from our product partner Veritas Fine Cannabis: 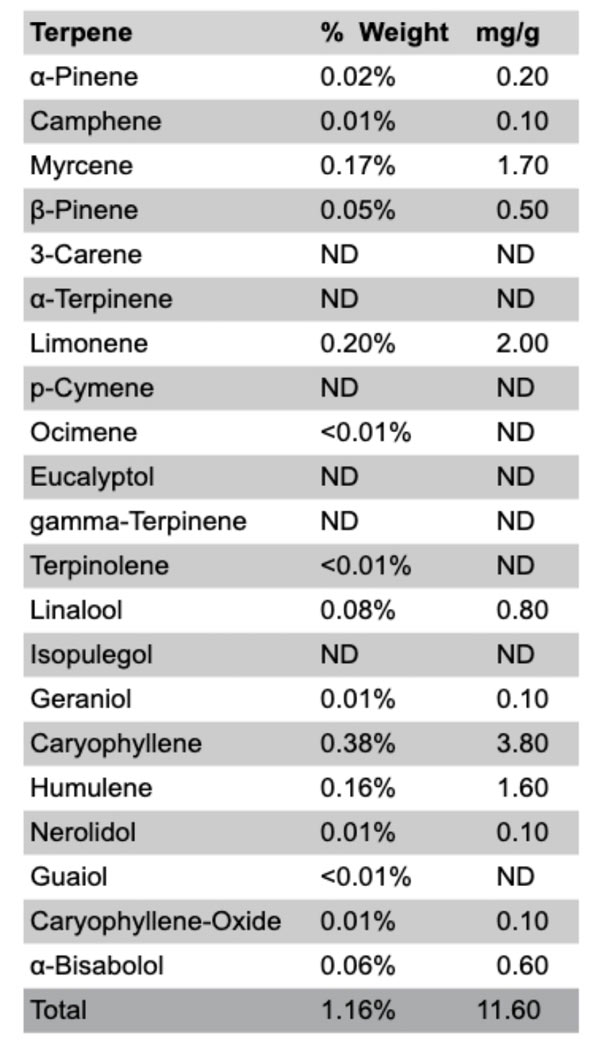 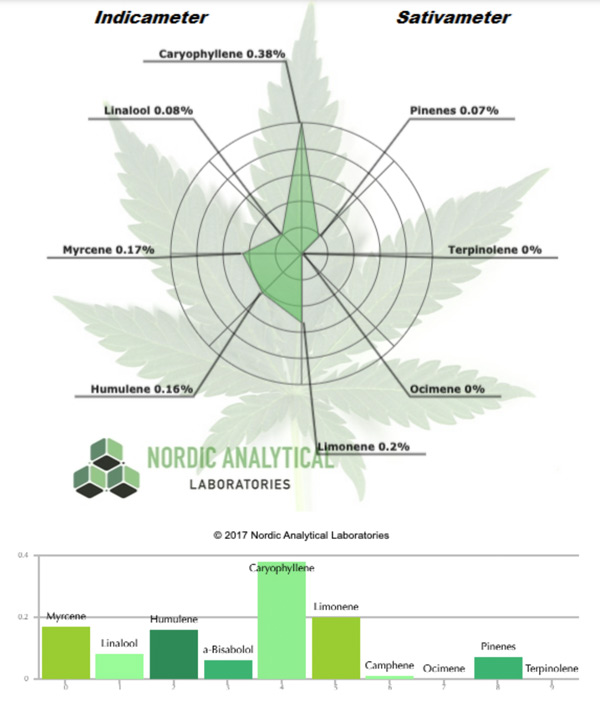 First, let's see if delivery is available in your area

Woohoo! Delivery is available in your area!
You will now be forwarded to registration..

Unfortunately we are not available yet in your area. Try another zip or get notified

For this zip code we currently only deliver to the following areas:

Yes! Nope :(
Are you 21 or older? This website requires you to be 21 years of age or older. Please verify your age to view content, or click "Exit" to leave.
Filter Products